March 14, 2015
Today we spent a few hours fluffing up the mulch with pitch forks, as it got pretty matted down over winter. In this picture Dan is noticing that we have a few German Red garlic starting to sprout as well. 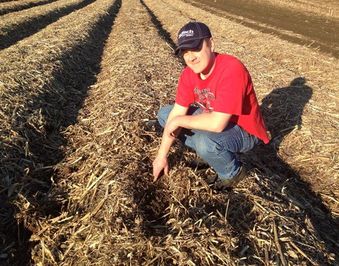 March 10, 2015
60 degrees F today, and look what we found!  Four of the 11 varieties are just starting to starting to poke out of the soil. The field survived the winter, and looks to be in great shape!
February 27, 2015-
In case you were wondering, the garlic in Tamarack is still hiding from the cold... I'd stay covered too when the forecasted low for tonight is -12*F... 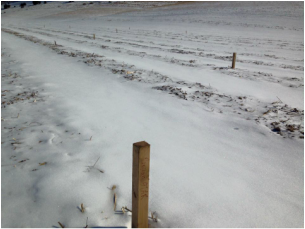 February 2, 2015-
We haven't had much snow cover this winter... The most snow came right away, and melted before Christmas. There's barely enough snow to cover the mulch.  Luckily we piled the mulch on this fall! 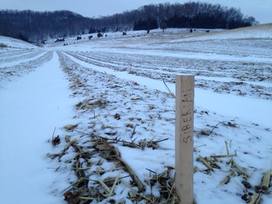 October 15, 2014-
Dan took care of putting mulch down over the garlic over the weekend.  And it was a good thing he did, as we received over another heavy rain shower.  The raised beds looked great after the rain, and happy to see we had root growth within 6 days of planting!
October 10, 2014-
Planting for 2014 at Tamarack Garlic Farm is in the books!  We planted close to 23,000 garlic cloves over two days...luckily we had a GREAT crew of family and friends to help us.  Overall, things went pretty smooth, and the weather finally cooperated  to allow us to get the crop into the ground before winter sets in.

Mulch will go on in the next day or two to cover up the crop to prevent erosion this fall, act as a blanket for warmth in the winter, prevent weeds in the spring, and keep moisture in during the warm days of summer.

We look forward to bringing our crop to your table this summer!
October 5, 2014-
When it rains, it pours!  We've received nearly 1.9 inches of rain over the past few days, which puts our planting on hold.  With fall in full swing, it takes longer for the soil to dry out.

The graphic below is shows that we've "been wetter than normal" in 2014.  But, every rain cloud, has a silver lining, right?  I look at it as by waiting to plant a couple days puts us in line with planting with the next full moon phase (Oct. 8th).

Some people swear by planting with the" lunar cycles", while others think it's "lunacy"... Many believe that planting with the full moon helps with plant geotropism, quicker germination, and plant biochemical processes.  The advice I give my students in Plant & Soil Science class is that there is "likely some advantages" to coinciding your planting with the moon, but it's more important to let the local weather forecast and past experience dictate your planting."

In other news, we had out first light frost this morning, which is a couple days after the "Historical Average" frost range of Sept. 27-Oct. 3rd.   We hope to get the garlic cloves in the ground this week with the expected "dry" forecast. 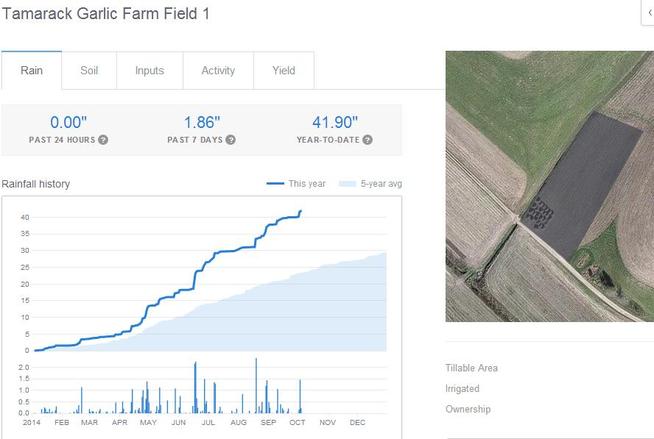 September 30, 2014-
Hopefully the rain isn't as bad as forecasted for the next couple of days....

Tonight Jason ran the disc one more time over the field, while Dan prepared the raised beds. Finished in the dark again.  Can't believe how early the sun goes down lately.   Hoping for some sun this weekend so we can start planting.
September 28, 2014-
Today we played in the dirt.  We dug out the disc and did three passes to continue to break up the soil. When the field was nice and smooth, we hooked up the bed-shaper and did some adjustments so it will work great come planting day.
September 24, 2014-
Our second shipment of garlic seed came today!  We purchased this seed from Phil Greif, of Greif's Gourmet Garlic, out of the state of Oregon.  Phil has been more than generous with lending his years' of knowledge, advice and support in helping us succeed.  We hope that we can someday repay the favor, as well as help out other garlic producers as well.

Dan, his wife Emily, and his sister Julie sorted and organized this shipment of seed tonight, while Jason took care of ordering organic fish emulsion fertilizer.  Also ordered was a mycorrihizal fungi product that enhances root growth, improves nutrient and water uptake, and aids in minimizing plant stress.
September 23, 2014-
Our first shipment of seed came in today from Keene Organics. We opened the packages and weighed and organized the seed into crates.  The mosquitoes were the size of hummingbirds, but this task only took a out an hour to get it weighed, labeled, and organized.  Hope to have the other half of our seed by the end of the week.

September 22, 2014-
Today we tilled the red clover cover crop under with a moldboard plow.  We're fortunate that Dan's parents allowed us to use their equipment.  We started the first few passes with an Allis Chalmers WD-45, put soon switched over to the "new" Allis 6080 with front wheel assist...making plowing a breeze.  A shipment of large square bales came to the farm today as well, and Dan's Dad and our friend Cory helped unload the straw in the dark. 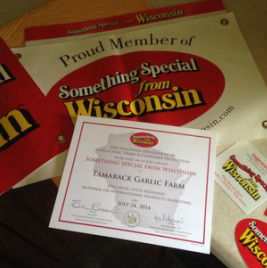 Today we received word that Tamarack Garlic Farm has been accepted into the "Something Special from Wisconsin" program!  Look for the SSfW logo on our packaging!

We also recently have completed our listing with www.SavorWisconsin.com to help expose our product to the public searching for Wisconsin-grown products.

May 27, 2014-
If you look closely, you can see the cover crop of oats and red clover that was planted in the center of the strip.  In October, this area (one acre) will be planted with 12 varieties of garlic.  Shortly after this picture was taken, it rained 1.5" and is sure to "green-up" in the next couple of days. 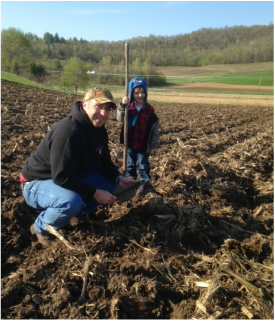 May 17, 2014-
We took soil samples with the assistance of one of our helpers (Conner, age 5).  We are closely monitoring the amount of Nitrogen, Phosphorus, and Potassium present, along with keeping tabs on secondary nutrients Calcium, Sulfur, Magnesium, and Iron  for optimum plant growth, health, and yield.

The rain also held off just long enough so the field could be prepped to plant the cover crop this weekend too!


Also, our new bed shaper and 2-row garlic planter will be ordered this week so we can work a little "smarter, not harder." 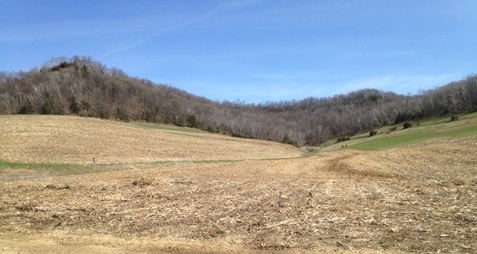 April 26, 2014 -
We are waiting for the weather to warm up so the garlic field (on right) can be seeded down with a cover crop of oats and red clover for fall planting.